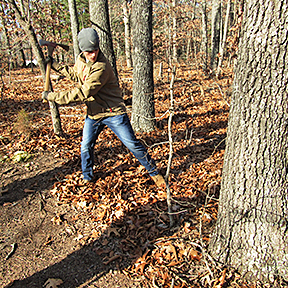 A group of volunteers met at Maramec Spring Park on Saturday, December 3, to work on clearing what will be a mountain bike trail running through the grounds.
Volunteers from Route 66 Bicycles, Gateway Off-Road Cyclist, and members of the Missouri University of Science and Technology ROTC came out to remove overgrowth, tree stumps, and other obstacles along the route, which will eventually run throughout sections of the park.

Do you love Missouri’s state parks and need a way to introduce the fun to someone else? Now is the perfect time to purchase a Missouri State Parks gift card for yourself and receive another one you can use as a holiday gift.

The Missouri Department of Natural Resources announced that a portion of Katy Trail State Park will be closed starting Tuesday, Dec. 6, and continuing Monday through Friday each week through January.

The Missouri Department of Conservation (MDC) recently set turkey and deer hunting dates for the 2023-2024 seasons along with regulation changes for the 2023-2024 deer-hunting season. The regulation changes include a new firearms early antlerless portion, a new firearms CWD portion, and changes to firearms antlerless permit numbers in most counties. The hunting dates and regulation changes were approved by the Missouri Conservation Commission at its Dec. 2 open meeting in Jefferson City.
“The changes to deer hunting regulations for the 2023-2024 deer season were motivated by increasing deer numbers throughout much of Missouri and in response to changes in the distribution of chronic wasting disease (CWD) in the state,” said MDC Cervid Program Supervisor Jason Isabelle. “With a growing deer population in most Missouri counties, we’re increasing opportunities for hunters to harvest deer both within and outside of the CWD Management Zone next year.”

New Firearms Early Antlerless Portion Oct. 6-8
MDC will offer a new firearms early antlerless portion Oct. 6-8 for 2023 in the same 100 counties open for the firearms late antlerless portion Dec. 2-10. Get regulation details and a map of open counties from the MDC website at mdc.mo.gov/hunting-trapping/species/deer/regulation-changes-2023-24-deer-season
“With deer populations being at desired levels in most counties but continuing to increase, additional antlerless harvest is needed to stabilize deer numbers,” said Isabelle. “The creation of an early antlerless portion of firearms deer season and increasing the availability of antlerless permits in most counties will provide hunters with more opportunities to harvest antlerless deer and help meet our deer-management goals.”
According to MDC, firearms antlerless seasons that occur prior to the primary firearms season are not uncommon and several Midwestern states have established similar season portions.
“The early antlerless portion will help to increase antlerless deer harvest prior to the November portion of firearms season when the focus of many hunters is on harvesting a buck,” said Isabelle. “The timing of the early antlerless portion was designed to occur when weather conditions are generally comfortable and during a time that will minimize conflict with archery hunters, who spend the most time hunting during late October and early November as the rut approaches.”

New Firearms CWD Portion Nov. 22-26
MDC will offer a CWD portion of firearms deer season Nov. 22-26 in CWD Management Zone counties during the 2023-2024 deer season. Get regulation details and a map of open counties from the MDC website at mdc.mo.gov/hunting-trapping/species/deer/regulation-changes-2023-24-deer-season
According to MDC, hunters will be able to use any unfilled firearms deer permits during the CWD portion and must abide by the statewide limit of one antlered deer during the firearms deer season, all portions combined. They must also abide by county-specific firearms antlerless permit numbers.
“Like they are in most of the state, deer populations are increasing in most CWD Management Zone counties,” said Isabelle. “Because higher deer densities can increase the rate of CWD spread, additional deer harvest in the CWD Management Zone is needed to prevent further increases in deer numbers and help minimize the spread of the disease.”
He added that the timeframe of the CWD portion was selected because it occurs during the tail end of the primary rut, or breeding season, when deer activity is typically high and when hunter interest remains strong.
“When looking for the best time to provide hunters with more opportunity in CWD Management Zone counties, we considered a number of factors including the potential for good deer movement, level of hunter interest, and potential conflict with other hunters,” said Isabelle. “The late November timeframe avoids peak archery hunting weeks and occurs during a time when deer movement is generally good, and when hunters are eager to be in the woods.”

Get regulation details and a list and map of allowed antlerless permit numbers by county from the MDC website at mdc.mo.gov/hunting-trapping/species/deer/regulation-changes-2023-24-deer-season
Detailed information on the new firearms early antlerless portion, the new firearms CWD portion, and changes to firearms antlerless permit numbers by county will also be included in the MDC 2023 Fall Deer & Turkey Regulations and Information booklet, available starting in July where permits are sold and online at mdc.mo.gov.