Congratulations to Nicholas Wayne Rowden for his enlistment in the United States Marine Corps. Nicholas has chosen to become an Infantry Marine.

He has enlisted for eight years, four active and four inactive, and will leave August 22, 2022, for the Marine Corps Recruit Depot in San Diego, California. Rowden, son of Mark and Rhonda Rowden, is a member of the 2022 Senior Class of Bourbon High School. Rowden is pictured with his parents, sister Megan Rowden and his recruiter Sgt. Jacob Kohrmann. 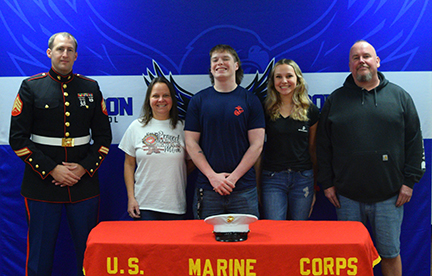