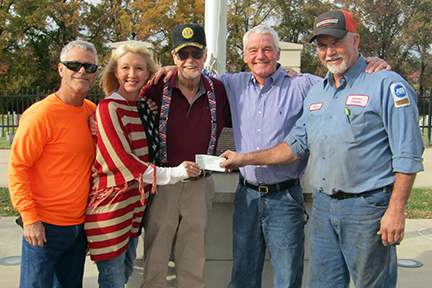 Members of the Flett family, including Scott, Melanie, Howard, and Mark, presented Wreaths Across America co-organizer Bruce Daniels with the check at the Missouri Veterans Home-St. James, the site of Wreaths Across America and noted this year’s fundraiser was a huge success, with many new and returning sponsors and participants.
“I had a gut feeling this could turn into something a little more than we expected, so, you know, to name it Carol Flett for Veterans will allow us to help other folks, too,” Scott Flett explained. Carol Flett, who was the matriarch of the Flett family before she died, was a strong supporter of veterans and the family is continuing that tradition with the fundraiser in her honor hoping to aid veteran organizations.
“We want to be able to help people, man, and at the end of the day, that’s what my mom wanted to do,” S. Flett said. “We’re going to regroup and want to be able to help out veterans in our area, right here.”
Wreaths Across America is a nation-wide organization that puts a wreath on the headstone of every veteran laid to rest in a state veterans cemetery. Flett said it was the goal of the tournament to help fund the local operation this year.
Last year was the first year the golf tournament was held and was a huge success, even during the global pandemic. The Fletts took what they learned and grew the event this year and raised more than enough to fund Wreaths Across America and the family said they were interested in helping other veterans with the additional money they raised.
“All we want, of course is to honor our veterans and remember their sacrifices. We want to teach other people. I think it is very important to carry on the tradition and teach those younger than us what the value is,” M. Flett said. “Because freedom isn’t free and no one sacrifices as much as veterans do.”
Wreaths Across America will be held on December 18 this year. Each of the 761 headstones in the St. James Veterans Cemetery will receive a wreath in honor of the sacrifices veterans made and those in attendance will pay tribute to their service through the program.
Part of National Wreaths Across America Day, the St. James event will be one of more than 1,200 held in this year’s day of remembrance. The goal of the day is to place a live, balsam fir wreath at the headstone of every veteran buried in a veteran’s cemetery. Wreaths Across America Day is a free, non-political, community event open to all people.
The Fletts said it was only through the overwhelming support of sponsors and participants could this endeavor be possible. “That says a lot not only about the cause, but the people that are contributing,” M. Flett said.
The family said they are looking at ways to continue the success, but to also get people involved in the Wreaths Across America ceremony itself and other efforts to help local veterans.
Plans are still taking shape on this year’s ceremony, as COVID-19 protocols altered last year’s and may play a part in this year’s event, too. More details will be provided closer to the event for those wishing to participate.